Majestically placed in Room 3 of the Museum of Miniature Houses and Other Collections in downtown Carmel is The Sahlberg, a one-of-a-kind, three-story miniature house designed by nine of the nation’s finest miniature artisans. 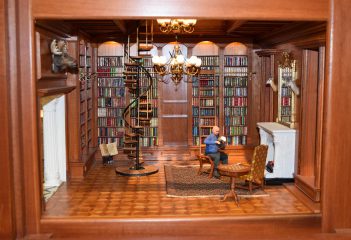 A miniature 3D sculpture of Carl Sahlberg reading “Dracula” is placed in the middle of the bookcase. (photo sent)

Floors include 3,000 pieces of laser-cut parquet and real marble in the lobby. The grand foyer dome was created with 10-inch leaded glass, at a cost of $1,000. Over 2,100 books are placed on the shelves of the library, each individually titled with classic stories. A three-story spiral staircase is featured in the center of the Sahlberg, which is enclosed in a custom cherry wood cabinet.

The house‘s architect and designer, Jimmy Landers of Huntingburg, collaborated with eight of the nation’s top miniature crafters to create custom pieces for The Sahlberg. He said it is the largest group of master miniaturists to work on a single project.

“Top artists were willing to share their work with me in my work,” he said. “This is truly a one-of-a-kind piece that will truly never be replicated.” 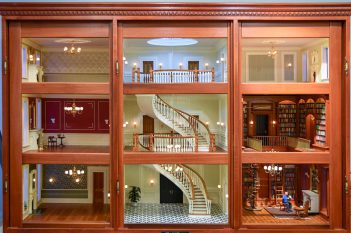 The Sahlberg House is on display at the Miniature House Museum until mid-April. (photo sent)

Landers said he believes in giving serious miniature collectors large pieces that can be lavishly decorated and accessorized while showcasing the craftsmanship of the house. He said he started working on miniatures in 2000 after his retirement. His wife, passionate about miniatures, asks him to build a doll’s house.

At the time, Landers said he never built a dollhouse, but learned to create his first, a colonial miniature called Brandywine, Maryland, for his wife.

Landers said he was an oddity in the miniature world. He does not copy drawings from magazines and does not put anything on paper. He said he often woke up at 3 or 4 in the morning with an idea.

“I design in my mind and build from that,” he said.

Landers spent 12,000 hours over two years working on The Sahlberg, her 19th dollhouse. He said he frames his stick-built pieces like one would frame a house. The Sahlberg is 49 inches high, 72 inches wide, and 20 inches deep. 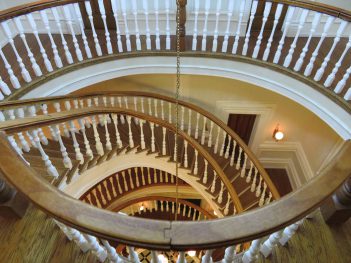 The staircase of the Sahlberg house. (photo sent)

“It’s just amazing,” she says. “Everything is top notch.”

The Sahlberg came to Carmel through the connection of miniature electrician Carl Sahlberg, the piece’s namesake and owner of Creative Reproductions 2 Scale. Sahlberg is the designated miniature electrician and takes care of the lighting for the Museum of Miniatures Houses, which is located at 111 E. Main St. in Carmel.

Bedford resident Sahlberg installed a chandelier, sconces and plug-in baseboards in The Sahlberg. The three-tier sconces and chandelier, designed by Linda Orleff of Tennessee-based Lighting Bug Ltd., are valued at $3,000.

Sahlberg tours dollhouses all over the country, wiring electricity and installing lighting in miniature houses. It even installs tiny wall switches.

“You have to use your fingernail to turn them on and off,” Sahlberg said. “There are a multitude of options in the electronic side of these miniatures.”

Sahlberg said he found his niche in creating electrical wiring for dollhouses. Uniquely, the Sahlberg runs on 12 DV of DC power instead of an AC circuit and is wired in much the same way as a full-size house.

“I’ve developed a whole series of components for dollhouse wiring,” he said.

Sahlberg said the wiring of dollhouses and miniature houses is not a problem, but it is difficult to configure ways to hide the wiring in the houses.

The Sahlberg’s walls are permanent, so Sahlberg had to make sure all connections last a lifetime. He placed at least two paths to each light and built an 1/8-inch LED strip across the front lip of each piece to provide natural lighting. Sconces and chandeliers use incandescent lighting. Sahlberg said the incandescent lighting from the chandeliers, combined with 500 pure light LED bulbs, makes the rooms look crystal clear and clean.

Landers said the Carmel Miniature House Museum is a treasure and one of the best miniature museums in America. The Sahlberg is expected to remain on display at the museum until mid-April.

“I will never build anything bigger or more beautiful than this,” Landers said. “It’s the ultimate piece for me.”

Landers and Sahlberg, both in their 70s, said they spend 90 percent of their days working on miniatures.

UPCOMING EVENTS AT THE MUSEUM

February 23 and March 30 – Breyer fun day. 11 a.m. to 2 p.m., regular admission applicable. Enjoy Breyer horses from our permanent collection, enhanced with real horsehair manes and tails, handmade bridles and saddles, and costumed riders tailored to each type of horse. Paint your own 4-inch “Stablemate” Breyer horse with the materials provided.

February 27 – Festivals of Creativity and Crafts, lunchtime, free entry. Brynn Tryska, who recently moved to Carmel, will perform jazz classics and contemporary favourites. Brynn has toured nationally with NETworks and ArtsPower productions and enjoyed working regionally with the Geva Theater Center and Playhouse on Park.

March 13 – Festivals of Creativity and Crafts, lunchtime, free entry. Gloria Schotter, a jewelry designer, began her artistic career by joining the Air Force as a graphic artist and continued as a Department of Defense employee as a visual information specialist in Hawaii.