Grosse Pointe is back to its favorite Father’s Day tradition.
Marking its post-pandemic return with an official name change, EyesOn Design at Ford House returns to 1100 Lakeshore, Grosse Pointe Shores, from 10 a.m. to 4 p.m. on Sunday, June 19.
“We are now EyesOn Design at Ford House,” said Kathy Lightbody, general president and media relations. “In part, we are showing our commitment to Ford House, as well as their commitment to us and the community with all the developments they have made.”
This year’s event follows the ‘Designed for Speed’ theme and features racing cars of all makes, models and eras. Finding a suitable selection for EyesOn Design was a challenge, Lightbody admitted.
“When you consider that for every thousand or a hundred thousand production cars made, only a handful ever become or are built as race cars, some of those cars are some of the most valuable on the planet,” she said. “Getting people to show unique pieces is difficult. Finding them is also difficult.
Some of the racing cars scheduled for the event are recreations, replicas and tributes that tell the story of racing car development and design. They will be clearly marked, Lightbody noted.
“Almost every car in the field will have its own individual sign, as they all have a unique story to tell,” she added. “If you take the time to read the history of each vehicle, you come away with a richer understanding.” 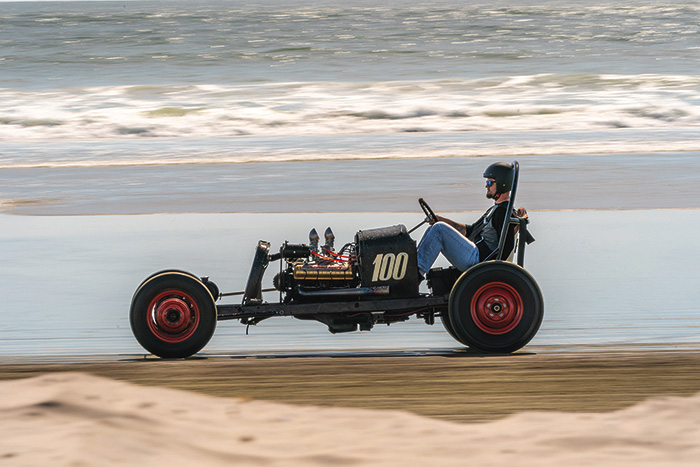 A racing car specially designed for the suspect device from 1920 to 1928.

Vehicles from as far away as Florida, California, Georgia, Texas and more have their place in the show.
“Moving vehicles like this is neither easy nor cheap,” Lightbody added. “These are all invitation-only cars. We like to say we are a world-class car show. So the fact that we can shoot vehicles of such value over such great distances is a testament to that.
“It’s unlike any other show we’ve had,” she added. “What’s interesting is that a lot of these cars are pushers – maybe there’s no engine. You can’t spin them around and drive them around the Ford House lot. C It’s tough…. We’ll be bringing a lot on Saturday, so there will be extra traffic on Saturday.
As the excitement builds over the festivities on Sunday, there are two days of activities leading up to the big day, starting with the second annual EyesOn Design Driving Tour, which takes place from 8:30 a.m. to noon on Friday, June 17 . The cost is $75 to participate.
“Only those who have registered in advance will receive an email notification of the starting point,” Lightbody said. “We will have coffee and donuts and they will receive instructions for the visit. We will pass through beautiful places on the west side.
The 75-mile tour along a winding route will be followed by lunch and a stop at a surprise destination. 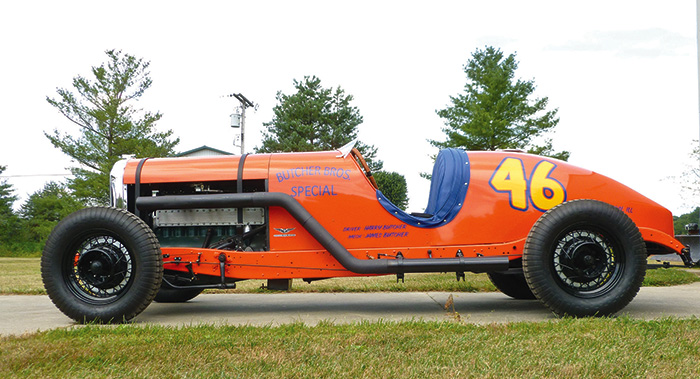 The party continues Friday evening at the Vision Honorée gala, from 6:30 p.m. to 10 p.m. at the Pontiac M1 Competition. Racer and design legend Peter Brock, winner of this year’s Lifetime Design Achievement Award, will be honored at a ceremony.
“We are thrilled to have Peter Brock and his wife, Gayle, here,” Lightbody said. “They are still very active in the racing and performance world.”
Gala tickets are $225. An optional race track experience is $150.
Twenty guests who attend the Vision Honored Gala will have the rare opportunity to drive a shotgun for two full-speed laps around Champion Motor Speedway, with a professional driver in a supercharged M1 Concourse fleet vehicle. These first-come, first-served experiences must be reserved in advance when purchasing tickets for Vision Honored.
On Saturday, June 18, two symposia will be held at the GM Design Dome in Warren.
“Strother MacMinn’s Influence” runs from 9 to 11 a.m. Noted for helping found Toyota’s Calty Design Research studio in California, MacMinn’s automotive design teaching career at the ArtCenter in Pasadena spanned 50 years , with students like J. Mays, Chris Bangle and Wayne Cerise.
Former General Motors Vice President of Design Chuck Jordan said, “If you’re in a car today, Mac probably influenced its design.” 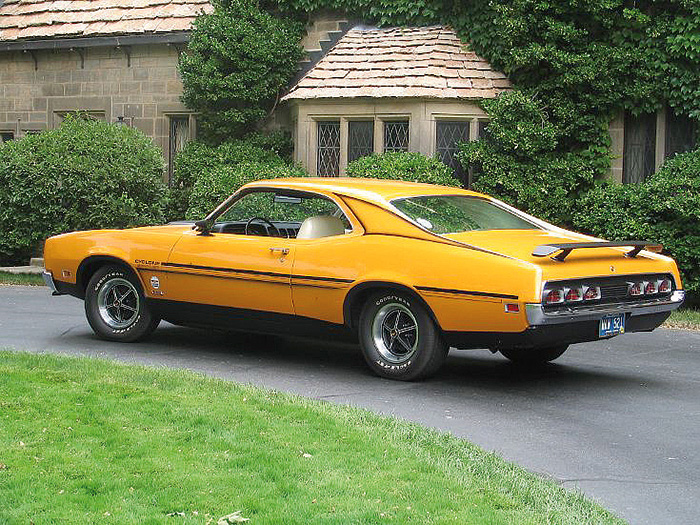 A rare example of his famous Le Mans coupé, built with bodywork made from the original mould, will be on display and will be at the heart of the round table. The cost is $50.
“We honored McMinn several years ago,” Lightbody said. “People wanted to come out and share how his influence continues.”
“Stingray Racer to C-8, from a Design Perspective” takes place from 1 to 4 p.m. and features Corvette design kings – Brock, Randy Wittine, John Cafaro, Tom Peters and Kirk Bennion. The cost is $100.
And later in the evening, a meet and greet event with Brock and other Corvette designers takes place from 6:30 p.m. to 8 p.m. at the GM Heritage Center in Warren. The cost is $40.
All special events are capacity limited and by reservation only. Call (313) 824-4710 or visit eyesondesign.com to purchase tickets.
Tickets to the EyesOn Design car show are $35 and available at the door. Children 12 and under are admitted free. 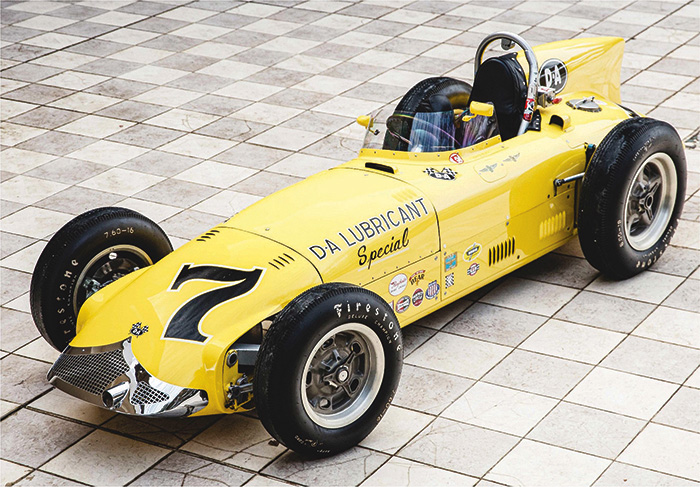 While walk-in visitors are welcome for the car show, reservations are required for the Private Eyes Brunch, which takes place from 11 a.m. to 1:30 p.m. on Sunday. Tickets are $85 for adults, $25 for children under 12, and include admission to the car show.
This year’s EyesOn Design grand marshal is Ken Lingenfelter of Lingenfelter Performance Engineering. The honorary president is Jack Rousch of Rousch Enterprises.
EyesOn Design’s product is a major source of revenue for the Detroit Institute of Ophthalmology’s work with the visually impaired and blind. The DIO is the research arm of the Department of Ophthalmology of the Henry Ford Health System.
“Henry Ford said, ‘The racing started five minutes after the second car was built,'” Lightbody said. “What we continue to love about EyesOn Design is that it’s a place where design is king, not who wins the race.”
For more information, visit eyesondesign.com. 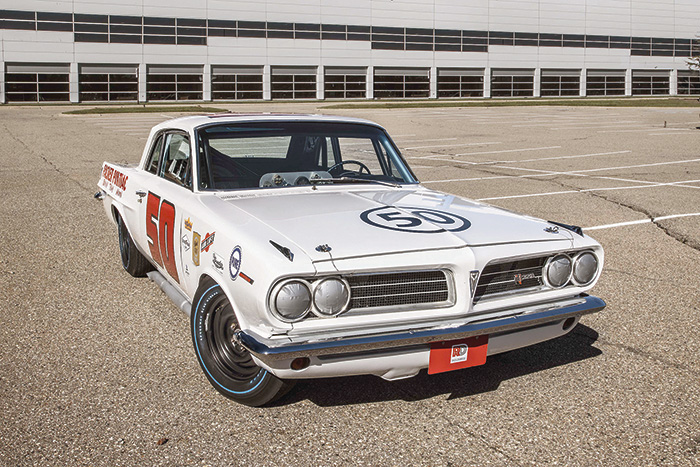 Photo courtesy of EyesOn Design
Pontiac entered a 1963 Pontiac Tempest Super Duty 421 in the inaugural NASCAR Challenge Cup, a 250-mile race at the Daytona Speedway oval for GT cars under 427.2 ci displacement. Pontiac’s Tempest was one of six lightweight 1963 Pontiac SD 421 Tempest coupes built. Driven by Paul Goldsmith, she took pole position. The competition included Ferraris, Jaguars, Porsches and Corvettes. The Pontiac won the race, lapping a Ferrari GTO eight times and finishing two laps ahead of the second-placed Corvette Mickey Thompson Z06, powered by a big-block Mystery engine and driven by AJ Foyt. The car was entered in the Continental Road Race the following week but did not finish. Shortly after, Mercedes purchased the car for competitive reconnaissance and it was never seen again.
Because of the importance of the original car in Pontiac’s performance history and because it probably doesn’t exist, Roger Rosebush of Essexville had the #50 Tempest recreated as it raced in the Challenge Cup, down to the smallest detail. 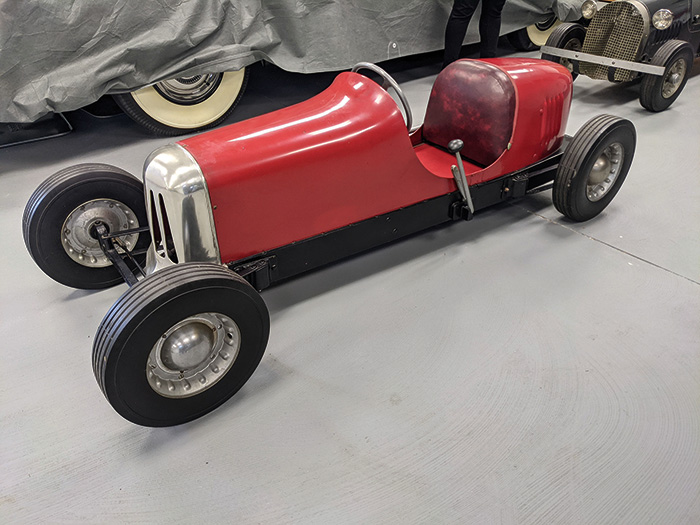 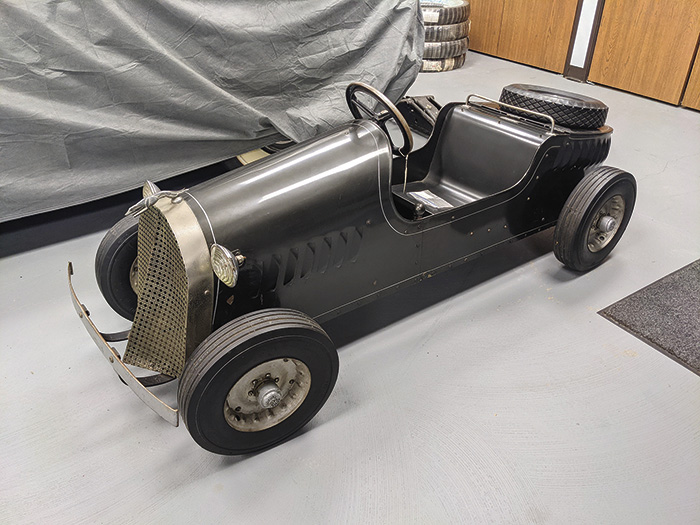 These petrol-powered miniature cars were used by Henry and Clara Ford’s grandchildren, Josephine Ford and William Clay Ford, when they visited Fair Lane.
L. Luzern Custer founded the Custer Specialty Company in Dayton, Ohio in 1920 to produce miniature and specialty electric vehicles. Early products included children’s vehicles, factory trucks and invalid carriages. All of these were electrically powered and recharged from an ordinary lamp socket.
… Eventually, the company branched out into gasoline-powered vehicles such as those seen here, which are powered by single-cylinder Briggs & Stratton engines. Production continued into the 1960s.
Possibly given to Ford’s two youngest grandchildren for Christmas in 1934, these very expensive toys were a perfect gift for one of America’s wealthiest industrialists.
— Collections from the Henry Ford Museum and Greenfield Village