Miniature fairy garden scenes date back over 100 years in England. Today, you will find them everywhere nestled in gardens. 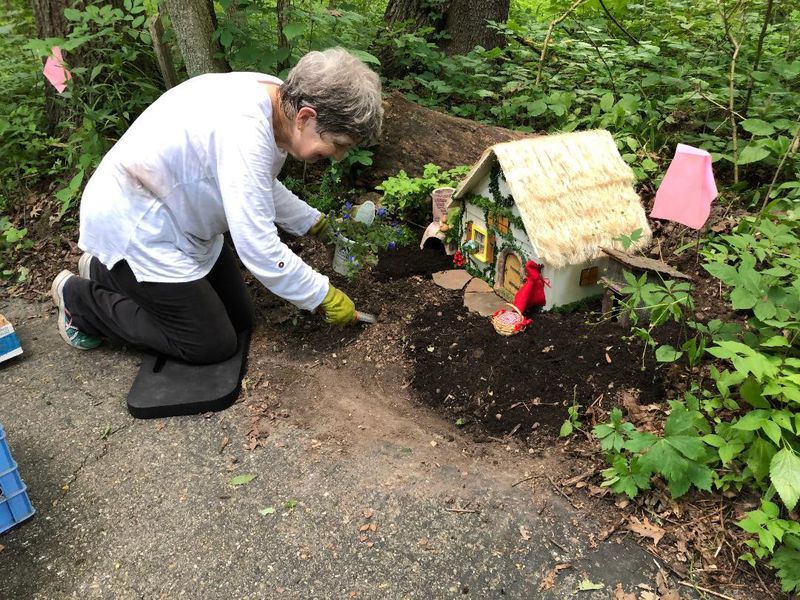 Hill, who has been volunteering in Aullwood for 25 years, worked first in reception and later in the gift shop. Eventually, she started making crafts for the shop. When Aullwood’s new executive director, Alexis Faust, asked her if she would be interested in creating fairy houses along the woodland path, she recruited her sister and a friend to help with the project.

“I had done fairy houses in an arboretum in Indiana,” says Faust, who served as president and CEO of the Taltree Arboretum before coming to Dayton. “People loved them, they captured everyone’s imagination – kids, parents, grandparents.”

Judi Hill creates a landscape for her home. CONTRIBUTE/DAVID ANDERSON 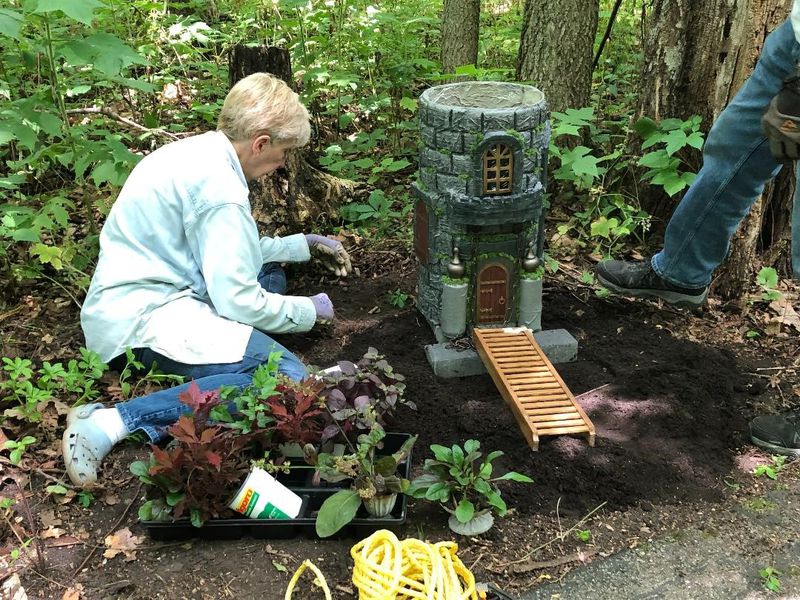 Judi Hill creates a landscape for her home. CONTRIBUTE/DAVID ANDERSON

Hill, who is from Beavercreek, says that when she was 5, she loved a comic book featuring Lilliputs. “I was playing and acting like the Lilliputs were all around me,” she recalled. “They were tiny and I was the giant. I think that’s why people like miniatures – we feel powerful and they’re so small.

Faust says the three Aullwood volunteers – who have been dubbed the Designing Divas – have the artistry, vision and skills to create tiny homes that attract thousands of visitors each summer. She says many people come back multiple times.

To exploreCommunity gem: Freda Patterson helps children and those in need in Riverside

“That first year, I don’t think any of us knew what we were doing,” admits Anderson, who lives in Butler Twp. “We used tree stumps as the base for the houses. Since then, other materials have been used, from recycled materials to gourds. The more I learn, the more excited I am.

The trio begins with a brainstorming session to decide on an overall theme. “Once we have a theme, we decide on six topics that would represent our theme,” she explains. “For example, when the theme was birds, we had to decide which birds we wanted our homes to represent.”

Each woman then chooses two houses she would like to build and begins her research. “We learn everything we can about our subjects and often scour the internet and YouTube for ideas,” Anderson says. “Then we decide how to build the house. From start to finish, the process takes several months. 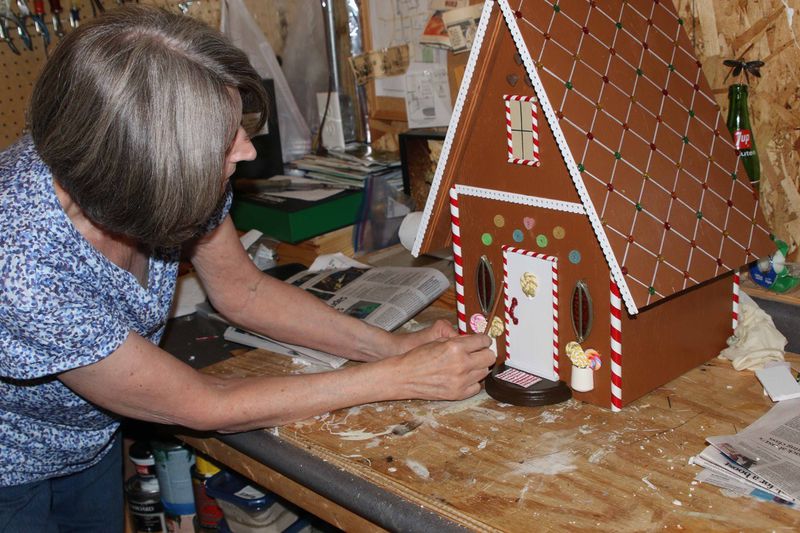 Hill says they try not to buy materials for the houses and prefer to make them from items they have in their garages, attics and basements. “Before we throw anything at home, we think, ‘What part of a fairy house could this be? This year, for example, a plastic spoon handle became a picket fence, a spa tub tray and a chain left from hanging from a chandelier became a castle drawbridge, wine bottle corks turned into a roof and a rope found new life as a thatched roof.

Traditionally, women work together in Aullwood to create their magical homes. This year, due to the pandemic, everyone worked from home.

“We really missed working together and exchanging ideas with each other,” says Hill. “This year’s Installation Day at the end of June was the first time we saw each other’s creations.”

In addition to installing the mini-houses and accessories, the women bring plants and flowers to create a colorful landscape around each house.

These miniature dwellings along the Aullwood Nature Center Trail have a fairy tale theme. CONTRIBUTE/DAVID ANDERSON 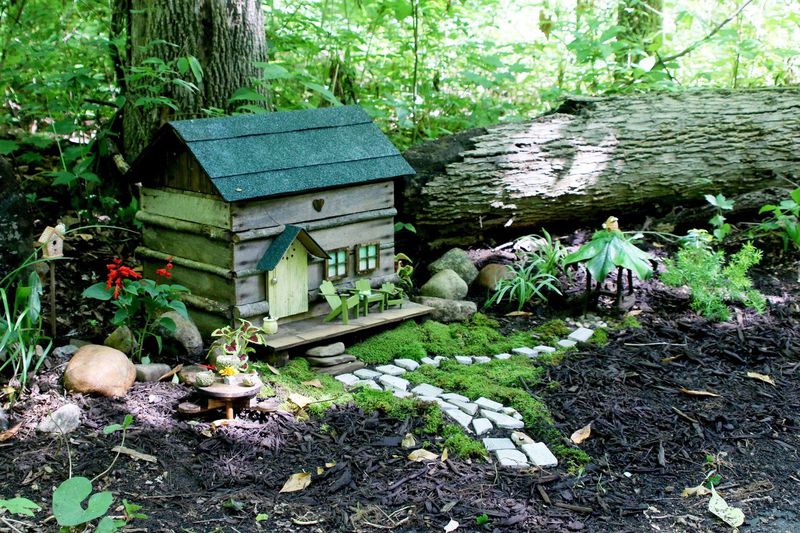 These miniature dwellings along the Aullwood Nature Center Trail have a fairy tale theme. CONTRIBUTE/DAVID ANDERSON

The Designing Divas say they couldn’t do their special work without the help of their husbands. “We decided we had the three best husbands in the world because they were all drawn to the project,” Hill explains. “They end up doing a lot of the world – hauling topsoil, sawing wood, pulling poison ivy, taking pictures and cheering us on!”

The women are happy to help out at Aullwood in any way they can. In addition to creating fairy houses, for example, Gehman, who lives in Vandalia, has fashioned wreaths for Nature’s Store, baked pies for Apple Fest, helped with children’s summer adventure classes and was made into an animal character for the Enchanted Forest on Halloween.

“I believe Aullwood really makes a difference in children’s lives by exposing them to the wonders of nature and teaching them about the world around them,” she says. “It’s a magical place!” Want to make a fairy garden?

If you want to create your own fairy garden, Kim Lemkau, owner of the Little Fairy Garden Shop in Yellow Springs, will be happy to help. In addition to selling handmade fairy-themed gifts, plants, artwork, and fairy costumes, its charming party room is available for miniature gardening workshops and birthday parties.

Her biggest customers, she says, are grandparents.

To exploreRoad, ramp closures coming this week for US 35, I-75

“You can create a fairy garden outdoors, in a birdbath or in a terrarium,” says Lemkau. “You can do a full scene for as little as $40.”

The shop sells tiny figurines, from dragons and pirates to pixies, gnomes, small furniture. You will find miniature plants and unusual plants such as the “plant with sensitivity” which opens and closes to the touch.

“Before, I used to bake, but I wanted to do something more fun,” explains Lemkau, who opened her shop four years ago. “I like!” 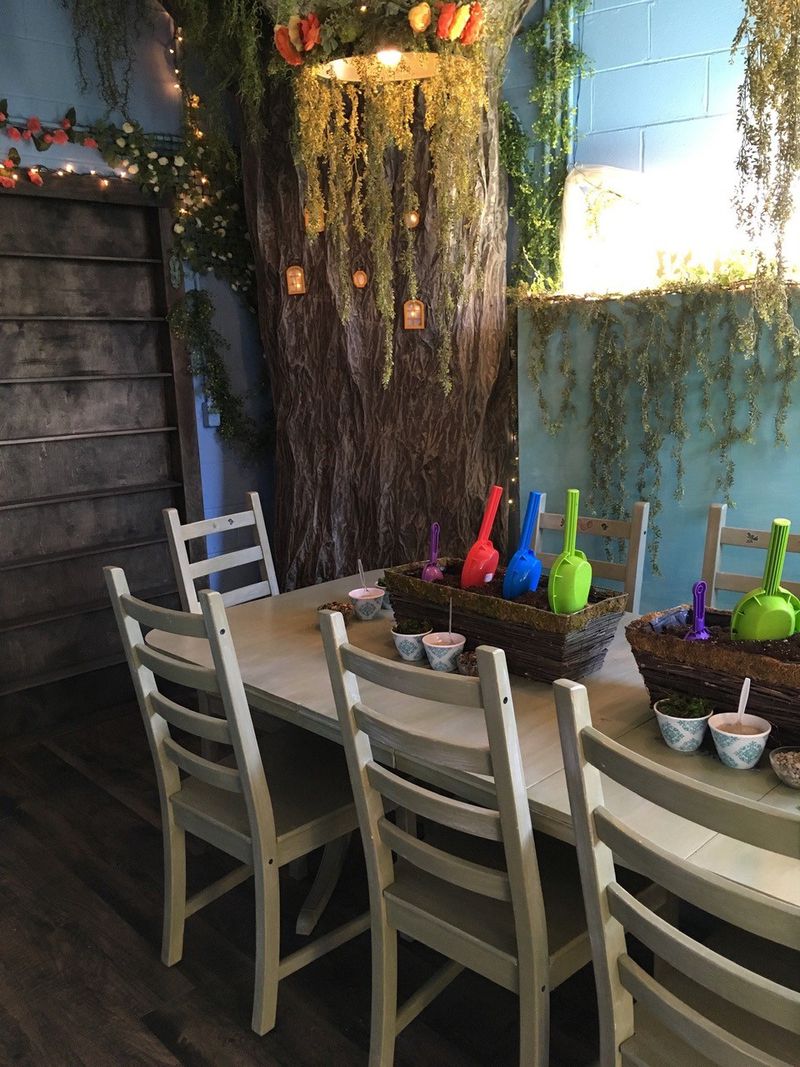 If you’re looking for miniatures, you’ll find a wide assortment at the Midwest Miniature Showcase in Fairborn scheduled for August 13-14. There will be over 30 tables of small items for sale from vendors in Ohio and other states.

“My love of miniatures began 63 years ago, when I was five years old and the salesman from Fuller Brush came to our house in Dayton and brought miniature samples of lipstick in tiny gold tubes” , recalls Kathy Davis of Tipp City, who works on the annual sale. “I was addicted! I loved playing with dolls and dollhouses and having a fascination with fairies. I made fairy houses from dried gourds and furnished them with dollhouse furniture. You are never too old to enjoy this wonderful hobby.

Admission: Free for children 2 and under, $7 for children 3 to 11 and $10 for adults and children 12 and over. Free for members of Friends of Aullwood, National Audubon Society. Aullwood is a Blue Star Museum with free military admission until Labor Day.