Tucked away on a quiet street in the neighborhood is a little piece of Raleigh’s Christmas history dating back to the 1960s.

If you lived in Raleigh during this time, you might recognize the mysterious Christmas Village miniature house located along New Bern Avenue as a treasured piece of your childhood Christmas memories.

If you were born after the 1960s; However, the little village house may never have even caught your eye.

Many locals wondered about the small house – either where it came from or what happened to it.

The Little House is one of the few remaining pieces from the Cross family Christmas exhibit, which included a small village and a miniature church, large enough for children to play inside. Decades ago, the Cross Family display was one of the most popular Christmas light displays in Raleigh.

“The Crosses always had the best Christmas decorations in Raleigh, and people came from far and wide to see them,” said Bobby Moore, who recalled seeing the lights when he was younger.

“In their early years of decorating, we were able to walk through the exhibit. But eventually the crowds and traffic got out of hand and we were no longer allowed to enter their yard,” he said.

Vintage pieces from the treasured Cross Family exhibit are scattered around Raleigh, but there are still a handful of those tangible vacation memories left. 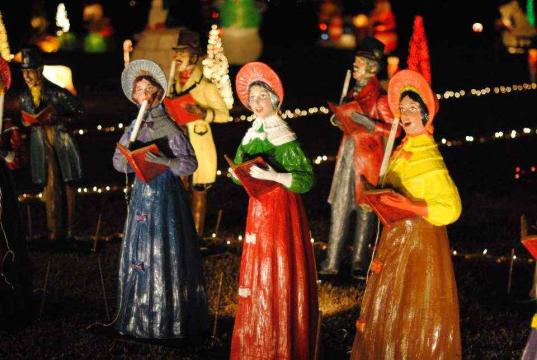 The Singers of the Cross Family: Restoration of Ancient Statues

Despite the joy and wonder that the display of the Cross brought to thousands of local families, their piece of Christmas history was almost lost forever.

The opening lines of Myrtle Cross’s obituary immediately reference her family’s service to the community, providing whimsical vacation memories to the people of Raleigh.

When Myrtle and Charles Cross passed away, their treasures were packed up and sold in a real estate sale. During the packing process, several period singers and statues in the crib scene were cracked, broken, or even completely turned to dust. 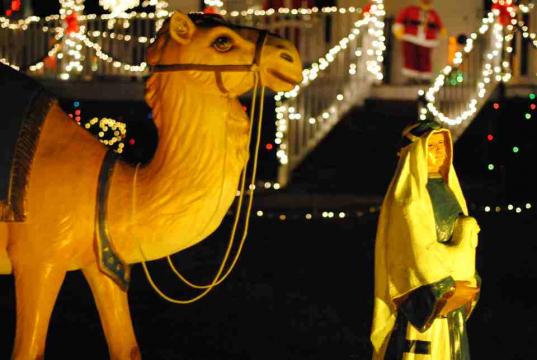 Bobby and Jan Moore, who run one of Raleigh’s most recent major holiday exhibitions, Happyland Christmas Lights, discovered the broken pieces and bought them all.

“You have no idea how excited I was when I saw those old decorations. I was like a kid again,” he wrote in an autobiographical post on Candid Slice.

He and his wife worked to restore valuable pieces of Raleigh Christmas history. Many photos of their restoration process are on the Happyland Facebook page.

They built shapes and frames for some of the damaged statues and then filled them with moss. They used marine plaster to make them waterproof. They carefully repaint each by hand with craft acrylic paint. 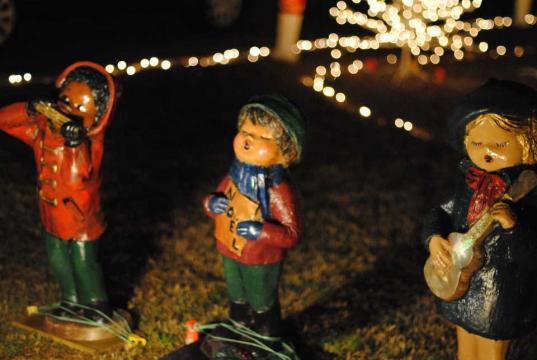 The historic statues have become part of the ever-growing Happyland exhibit, which has won a national television competition – the Great Christmas Light Fight.

Much like the Cross Family exhibit on New Bern Avenue, Happyland has become known for drawing lines of cars, allowing these historic decorations to stop traffic as they did decades ago.

Generations of locals come to see the new lights – but also to see the old decorations and share a dose of nostalgia with their children and grandchildren.

A 92-year-old woman saw the statues of the Cross on display for the first time in decades. She burst into tears as she shared the sight with her granddaughter.

“Hundreds of people drive by each year, many of whom remember visiting the Cross family Christmas exhibit as a child. It means a lot to have preserved this huge part of Raleigh’s history,” Moore said. 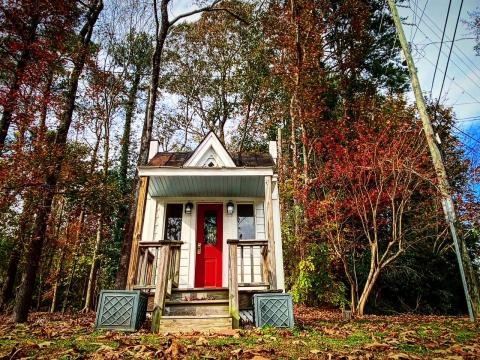 An overview of the appearance of the Cross family display

A viewer uploaded a video from an older TV newscast from another channel that shows the Cross family display in all its glory. Look at the miniature church and house decades ago before they were part of Christmas past.