It never hurts to throw a reference or two into your D&D game, just to make sure your players are paying attention. DM Sebastian Waters, a 31-year-old media developer from Gold Coast, Australia, decided to ‘bring some extra pop cultural fun’ to his campaign, building ‘pop culture’s most famous home’ . They’ve outfitted their fantasy village with a lovingly modeled medieval recreation of the Simpson family home, complete with miniatures of the famous cartoon family themselves!

“I like having a good collection of villagers and other townspeople to paint the picture of my world to my players,” says Waters, adding that he wanted to drop in a family that players would recognize.

So Waters put his architectural skills to the test, creating a detailed sketch of the Simpsons’ house, using every angle he could find on the show, and then redesigning it in Tudor style. He then built it from scratch using foam, in a day-long blur of a crafting session, documenting the process on his YouTube channel: SebMakesStuff.

But of course, there would be no point in making the Simpsons’ house just to remain empty and desolate. Waters therefore also created the Simpsons family, using 3D printed figurines made on Heroforge.

“I was actually quite shocked at how well the miniatures came out. I thought I was going to have to do a lot more kitbashing, but the Heroforge options covered the characters really well,” Waters says. app does not have a baby option, the DnD Simpsons family is currently without Maggie. 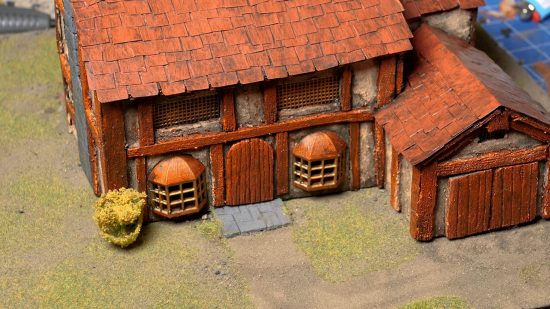 “I couldn’t find any other 3D models to make a good miniature for her. But I’ll be on the lookout to complete the family in the future.

The DM definitely plans to use his Simpsons home in a future game, though he hasn’t quite worked out the details yet. “Fortunately, I have hundreds of inspirational episodes to shoot. I might even try building a few more buildings, like a Moe’s Tavern or a kwik-E-mart,” he says.

Waters says he hopes his work will inspire someone to create their own pop culture creation. “The thought of my work being so well received by the community continues to amaze me,” he admits.