With miniature art now inscribed on UNESCO’s Intangible Cultural Heritage List, Taner Alakuş, a Turkish miniature artist, sheds light on how this branch of art, which has aroused significant national interest, is making progress on the international scene and the potential it holds. .

“Whether miniature art is a cultural heritage or not does not interest me very much. Some say it will be better known on international platforms. This art has already become national. Now it has gone international. It could only benefit us at this stage if it becomes better known, ”said Alakuş, who also works as a lecturer at Mimar Sinan University of Fine Arts (MSGSU).

Speaking to public agency Anadolu, Alakuş explained what intrigued him to enter the world of miniature art, his perspective and his understanding of this art form.

“My teacher, Dündar Tahsin Aykutalp, gave me a little presentation on traditional arts. It interested me and I wanted to work on this art form. I thought, ‘If this is a national art that belongs to us, then it would be better to learn this art.’ And then my adventure began, ”he added.

Stating that there was no lecturer who taught the art of miniature in the university at the time and that only one teacher taught all the classes such as tiling and calligraphy, Alakuş said that 40 years ago, traditional arts weren’t so mainstream.

“For example, the art of marbling was not as widespread as it is today. A marble worker came to class and we fought for his marbling. Today, they are pieces of paper that have no artistic value, but they were valuable back then. I always have these marbling of paper with me, ”said Alakuş.

“Our teacher was an interesting man. It was not like a university environment, but it was a pleasant environment. We were very attached to each other as friends. Of course, there weren’t a lot of publications and books. Right now you can access everything on the Internet. After that, we were able to improve our techniques ourselves, ”he added. 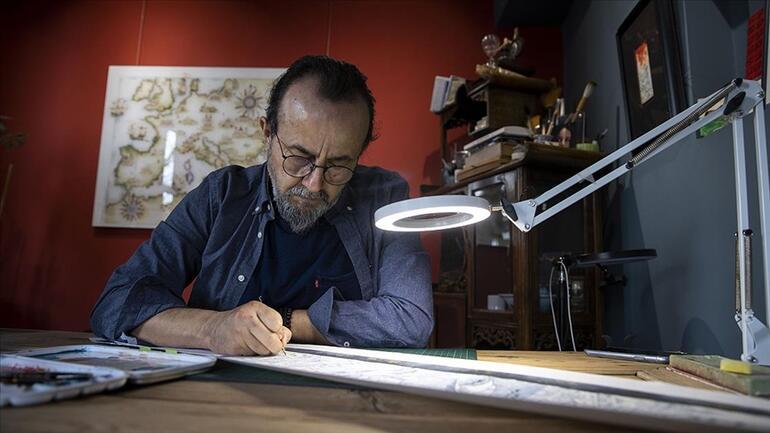 Emphasizing that a city where one lives helps to shape one’s personality, Alakuş said: “Istanbul is very important. It has been the capital of three civilizations and you can feel the history everywhere. Even when I walk down the street, I still try to create designs in my head.

Noting that by discovering art and his interest in it, he understood its monetary prospects, Alakuş said: “In researching how we can make money, we have discovered bibliopolises. They did not know the art of miniature. We started to make small works of art for these bibliopolises and this allowed us to earn money. I still hear that there are people who collect my works. I produced very high quality works at that time.

Stating that they also made the art of illumination to order, Alakuş said, “While we were trying to find collectors in the Grand Bazaar, there were private collectors who found us. The prices were low, but I never complained. I have always stayed positive. This positivity has really improved me.

“I worked for years to produce private collections and calligraphy illuminations, but I saw very good miniatures for the first time in the Süleymaniye library. When I saw the samples there, I discovered a bit more about miniature art. I made miniatures for myself and also to sell them in the markets, ”he added.

“Nobody does classic miniatures better than me”

Stating that his meeting with the master artist, painter and miniaturist, Yakup Cem, had a great influence on his approach to miniature art, Alakuş said he used his experiences to provide miniature art education in his students.

“I’ve been making miniatures for 35 years. I still feel like a student. Since there are figures and freedom in miniature art, it attracts me even more. You can include everything in a thumbnail, or you can fit a thumbnail for everything. I do what I want, “he added.

Alakuş said that he is also assertive about classical miniature art and has successfully mastered all of his techniques.

“No one can make classic miniatures better than me because I’ve been working on them for years and learned the techniques. I have miniature techniques in all my cells, ”said Alakuş.

Stating that he has never been afraid of criticism, Alakuş said: “The way people look at me doesn’t really interest me. I’m just trying to clear my brain right now. I have so much work to do and have many projects in mind, but time is not enough.

Speaking about adding miniature art to UNESCO’s list of intangible cultural heritage, Alakuş noted that if art is cultural heritage is not his concern, but now that he is about to be recognized internationally, that could be beneficial.

“It could only benefit us at this point. I don’t have to worry about whether it might help us or not. My only concern is to produce my art, ”he added.

Stating that he is an artist aware of the value of time, Alakuş said that he teaches his students using miniature techniques in a wide range and gives them great freedom in this sense.

The artist has invited to his studio all those who wish to learn about miniature art.